You’ve biohacked your sleep, your work productivity, and your morning routine. But is it possible to hack sports performance?

Of course! What do you think elite athletes and sports teams are investing a good chunk of their money in?

With so much technology and research going into the science behind sports performance, nootropics have emerged as one of the new secrets behind winning.

In this article, I’ll review a brief summary of nootropics, discuss why brainpower matters in sports, dive into specific ingredients that boost brain power and finally introduce you to the best nootropic for sports performance.

Nootropics are a collection of dietary and pharmaceutical interventions geared at improving cognition. Ranging from natural extracts to synthetic chemicals, the term nootropics is used to describe compounds that:

In fact, upgrading your brain may be the missing link to unlocking your full athletic potential.

Why Athletes Should Care About Their Brain

Besides it being crucial to life and longevity, of course.

According to a 2016 study out of Australia, elite athletes may require more brain power than your average Joe or Joanne. Researchers looked at two distinct groups of cyclists – one full of elite pros and one with average riders.

Both groups were put under duress by completing a mentally fatiguing task then racing through time trials. For a control, each group did another time trial preceded by staring at a blank screen for 10 minutes.

This task was the famous Stroop test, in which words for colors flash on a screen (black, red, yellow, etc.) inked in either the corresponding color or an alternative. Subjects were directed to press a button linked to the ink color itself, rather than the descriptive word.

For example, if the word “blue” is written in “black,” you click on it because it’s in black.

First of all, the elite cyclists performed much better on the cognitive task than the recreational group, suggesting they have better inhibition.

Inhibitory control seems to be linked to athletic performance – think of cyclists fighting the urge to give up when their legs or dying or quarterbacks resisting a throw to the first option as a linebacker closes in.

Not only did the elite athletes score higher on the Stroop test, but the mental fatigue also seemed to affect their time trial scores minimally. They were able to produce almost identical results in the time trial, whether they were staring at a blank screen before or doing a cognitive challenge.

These findings suggest that there’s some correlation between elite sports performance and the ability to withstand mental fatigue. If this connection exists in cycling, where little decisions are made during physical output, how important is optimizing your mental state for sports that are constantly changing?

Reacting to your environment in a timely, accurate, and intelligent fashion shapes decision, ultimately determining championships and losses.

If you reference back to the top, you’ll remember that nootropics specifically elevate cognitive performance under less-than-ideal conditions. In intense competition, nootropics could help you react quicker and make better decisions than your opposition under fatigue.

How Nootropics Can Improve Sports Performance

In sport, your state of arousal determines the energy levels required to compete. Humans, in general, sit somewhere on the arousal spectrum between complete coma (low arousal) to severe, paralyzing anxiety (high arousal).

Competition warrants elevated arousal, which is beneficial to a point.

By triggering our fight-or-flight response, we’re able to react quicker, run faster, and pump more blood to our muscles. However, too much arousal leads to crippling anxiety. And we’ve all seen the results of someone choking under pressure. 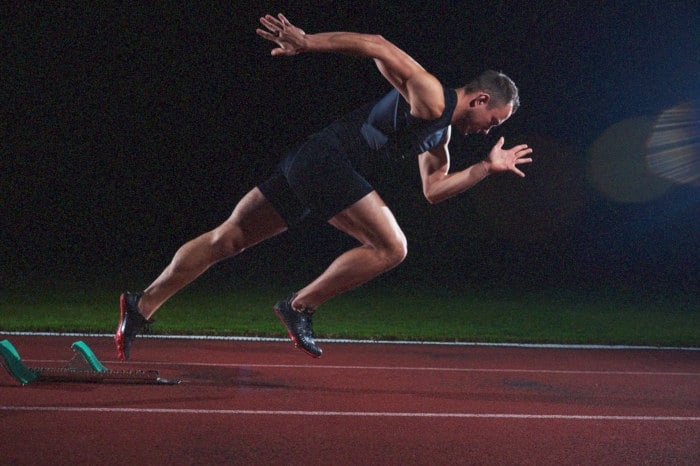 According to something called the “Inverted-U hypothesis,” a sweet spot of arousal exists for optimal performance. On either side of this tipping point, attention becomes too narrow, causing detrimental internal focus, or too broad, limiting an athlete’s ability to see fine details.

Each individual athlete has their own unique zone of optimal functioning [1]. But getting to that sweet spot is the key to performing. It’s literally the definition of being “in the zone” when you play.

Which Nootropics Can Benefit Athletes?

After all of that, you should be at least a little convinced that taking nootropics can make you a better athlete. But which nootropic to take?

Picking off a few nootropics from the list above to gain those specific benefits is certainly a good way to go. However, I prefer a more comprehensive approach and opt for a nootropic product which I haven’t yet mentioned called Mind Lab Pro.

Not only does it stacks every single ingredient mentioned above for elevating sports performance, but it also goes the extra mile.

Mind Lab Pro adds in B-vitamins and a few other nutrients for long-term brain health, protecting against damaging free radicals and other harmful substances. If you remember, one of the critical facets of a good nootropic is its neuroprotective abilities, and Mind Lab Pro definitely checks that box.

After using this nootropic for a while, it quickly became one of my favourites. If you’re interested in a few more details on Mind Lab Pro, please see my review of it.

Nootropics aren’t called “smart drugs” for nothing. You know they can boost your brain power. It just might be news that increased brain power can make you a better athlete.

All the compounds listed in this article can lead you down to road of improved athletic prowess. But if I had to pick one as the best nootropics for sports it would without a doubt be Mind Lab Pro. It is by far the most complete solution.