When you label a product as the “#1 nootropic stack in the US”, you’re setting the bar pretty high. So, when I decided to take Onnit’s Alpha Brain for a test drive, I was certainly expecting it to be all that and more. And, for a straight out of the box nootropic stack, I have to say I was indeed quite impressed.

Alpha Brain didn’t have quite the same effects as my proprietary stacks, which I meticulously fine-tuned over the years. But that, of course, can be expected. My stacks aare put together specifically to work well with my brain chemistry, diet, and other personal lifestyle factors. And as a pre-formulated supplement created for everyone, Onnit’s product worked much better than I assumed it would.

All the claimed benefits were there: improved memory and learning ability, better focus, and general mood improvements. The only thing I did not experience was lucid dreaming. For this effect, you have to take Alpha Brain much closer to your bedtime than I was doing. But, considering how other people reviewing Alpha Brain say vivid dreams do happen, and given that the supplement does deliver on all its other claims, I can give them the benefit of the doubt.

If you’re just starting out with nootropics, or are looking for an easy out of the box stack (and it doesn’t get simpler than just taking a couple of pills), I think you would be doing yourself a disservice by not at least considering Alpha Brain. Advanced nootropic users can also get worthy benefits from it, or use it as a solid base to stack with any number of racetams. Add to it all Onnit’s “Keep-It” money back guarantee, and there is zero reason not to give Alpha Brain a shot.

There are a dozen well-balanced ingredients that make up Alpha Brain. Each brings its own benefits to the table and also plays off the others to create a greater whole. Synergy is a beautiful thing in nootropics. As a result, you can expect a wide range of improvements across different functionalities and parts of your brain.

The combination of Alpha GPC and Huperzine A works to increase the plasticity of your brain which in turn boosts the amount of the neurotransmitter acetylcholine. The presence of acetylcholine is vital for the formation of memories, as well as for focus and reasoning. So, having more of it in your brain translates to improved memory and learning abilities. Of all the effects Alpha Brain provides, this is the one I felt the strongest.

Vinpocetine and a few other Alpha Brain ingredients work together to shore up further your concentration and cognitive abilities. They make sure your brain has all the oxygen and nutrients it needs by increasing blood flow.

Another batch of ingredients, the most notable of which is phosphatidylserine, help fight anxiety, stress and even depression. They promote calmness and put you in a deeper state of relaxation, which in turn gets you a much more restful and effective sleep.

And on the subject of sleep, Alpha Brain has also been shown to promote lucid dreaming. A lucid dream is one where you are aware of the fact you’re dreaming and within the dream, can control your thoughts, movements, other characters, and even the environment. You will have to take the supplement closer to your sleep to feel this effect.

Any benefits Alpha Brain provides will be more intense and noticeable for people who lead, let’s call it, “less than healthy” lifestyles. No matter how hard I try, that is me. If you’re physically active, get plenty of sleep, and eat a well-balanced diet that includes plenty of veggies, protein, and healthy fats, your body is already naturally sourcing and producing many of the compounds contained in Alpha Brain. But, there will always be shortfalls, so even you should see significant benefits from taking this supplement. They just may be a bit weaker than for the rest of us.

Getting a 100% accurate answer to the question whether something works is tricky, especially when it comes to nootropics. Many different things can dictate the effectiveness of a supplement, starting from your brain chemistry and what you eat to how much sleep you get.

Alpha Brain was created for the masses and targets the most common denominators. As such, in the vast majority of the cases, the answer is yes, it does work, and it works well. Looking over user reviews of it in nootropic communities and on sites where it is sold, I would say 8 to 9 out of 10 people usually sing Alpha Brain’s praises.

Based on my experience with Alpha Brain, I am also willing to put my reputation on the line and say it works. The effects didn’t blow me away, especially compared to some of my finely tuned personal nootropic stacks, but the difference between not using and using it is like night and day. 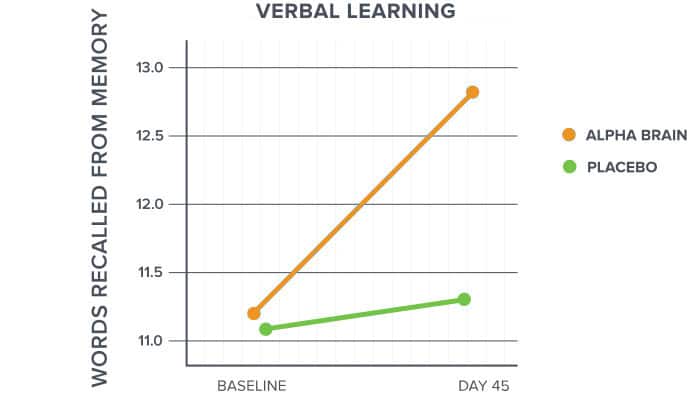 For those who like to see more scientific proof, when a randomized, double-blind verbal learning test conducted at the Boston University School of Medicine[1] put up Alpha Brain up against a placebo, this is what it concluded:

The use of Alpha Brain for 6 weeks significantly improved recent verbal memory when compared with controls, in a group of healthy adults.

Compared to the baseline, the study found a 12% increase in verbal recall and a 21% increase in mental processing speed. I’ll take those numbers any day of the week and twice on Sunday.

A separate study presented at a recent Alzheimer’s Association International Conference used EEG tests to show an increase in alpha wave brain frequencies in individuals who use Alpha Brain[2]. I guess that’s where the name comes from? These type of increases are usually associated with higher states of concentration and relaxation, two of the benefits the supplement claims.

The nice thing about pre-formulated supplements like Alpha Brain is that even though it is a nootropic stack, it comes in a single, easy to swallow pill. That makes getting the dosage right very easy.

The product manufacturer, Onnit, recommends taking 1-2 capsules fairly early in the day, and ideally with a light meal. If you’re particularly interested in Alpha Brain’s lucid dreams effects, supplement about 4-6 hours before you go down for the night.

If you weight more than 200 lbs (90 kg to my imperial challenged friends), you can consider increasing your dose to 3 capsules if you’re not feeling the supplement’s effects to your satisfaction. But, you should not take any more than that in a 24 hour period.

As you gain more experience with nootropics, you can also consider stacking Alpha Brain. It may sound weird to stack a pre-formulated stack, but many people do it. Alpha Brain does not contain any racetams, so stacking with something like a piracetam or pramiracetam is a great option.

Alpha Brain is classified as a nootropic. By definition, nootropics have low toxicity and are very safe to use. This is why drugs like Adderal, which can have some powerful side-effects, do not get the nootropics label.

Onnit, the maker of Alpha Brain, chose to be completely transparent about the ingredients in their supplement, including the exact dose they use for each. By doing this, they’re setting a great example I wish more blended product creators would follow. Having the full list of what’s in Alpha Brain allows us to dissect what we’re putting in our bodies and understand any potential side-effects.

On the whole, there are no worries when it comes to the safety of Alpha Brain. All its ingredients are natural, and all make the USFDA’s safe list. Onnit has also managed to balance them very nicely, meaning everything your brain needs for healthy and optimal functioning is there. My thoughts on each of the ingredients are as follows.

Alpha Brain is considered a safe supplement by the world at large, and after reviewing its ingredients, I couldn’t agree more. Where I would argue you should seek a second opinion is if you’re already taking any medication. In that one case, even though none of the ingredients come even close to setting off red flags, double check with your doctor before taking Alpha Brain (or any other supplement for that matter). Safety first.

Because of differences in brain chemistry, everyone will handle any given nootropic a little differently. So, no matter how safe a supplement is, and Alpha Brain certainly falls into that category, a tiny percentage of users may experience some side effects. There are only a couple I have seen reported, and the good news is that in addition to being rare, they are also pretty tame.

The first possible side effect is headaches or jaw pain. These are caused by increased levels of the neurotransmitter acetylcholine. Alpha Brain contains Alpha GPC and Huperzine A, both of which intentionally promote the creation of acetylcholine. For the few individuals who experience these pains, the amount may just be a bit too high.

The other side-effect I have heard of are vivid dreams that are a little too vivid for comfort. This, however, should be an easy one to get around by taking Alpha Brain earlier in the day. The more time that passes between you taking the supplement and hitting the hay, the more reduced the intensity of lucid dreams.

Alpha Brain keeps the side-effects to a minimum by only using ingredients that are low toxicity compounds and that the FDA considers safe to use. Onnit stayed clear of including racetams in the formula, which helps Alpha Brain avoid many of the potentially more severe problems some competing supplements may produce.

Where to Buy Alpha Brain 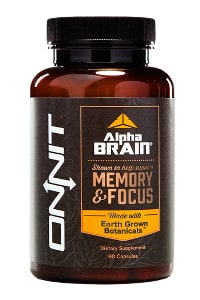 The best place to buy Onnit’s Alpha Brain is from, well, Onnit (enter code GETONNIT at checkout for an extra 10% off). You will be guaranteed you’re getting the real thing, which, considering this is something you’re putting in your body, I would say is rather important.

Onnit also backs its products with their awesome “Keep It” money back guarantee. If you find the supplement is not for you, it literally won’t cost you a dime. So, you really have nothing to lose by taking Alpha Brain for a spin. If you’re looking to improve your memory, learning ability, mental speed, focus, or mood, I challenge you do show me an easier way than Alpha Brain to get that done.