You are here: Home / Guides / Increasing BDNF With Nootropics

Nootropics aren’t just about hacking your brain to make yourself smarter. Did you know that nootropics can keep your brain in tip-top shape as you age and help prevent brain disorders and other diseases? All of this is thanks to a compound known as BDNF.

Brain-derived neurotrophic factor (BDNF) is a type of protein found in the brain responsible for creating new neurons from stem cells and encouraging existing neurons to stay as healthy as possible.

Essentially, BDNF can be thought of as the “wiring” for the pathways in your brain to keep doing their jobs correctly. It does this by simply binding to the appropriate receptors.

For example, as shown in the image below, BDNF can exert a protective effect on nerve fibers that could otherwise be damaged by cell-mediated immunity associated with multiple sclerosis. Rather than allowing β-cells and macrophages to cause neuron damage, BDNF can actually serve a therapeutic role. 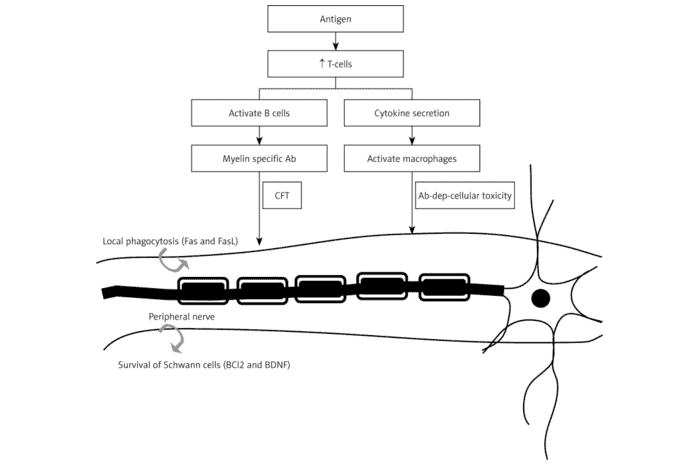 BDNF can be produced naturally through exercise.((Kelly Servick. How Exercise Beefs Up the Brain. Science.com. (2013) Oct 10))((Sama F Sleiman, et al. Exercise promotes the expression of brain derived neurotrophic factor (BDNF) through the action of the ketone body β-hydroxybutyrate. eLife. (2016); 5: e15092)) It is believed that this effect is due to the need for coordination of movement. In fact, the brain seems to get a bit of a workout while your muscles and joints do the same.

By increasing the production of FNDC5 (another type of protein in the brain), increased levels of BDNF can allow for improved functions such as memory and learning.

How Can Nootropics Help to Increase BDNF?

Of course, we can only exercise so much. You’re busy, we’re all busy, there isn’t enough time in the day, and if you’re already active, there’s only so much more you can do… but you want a healthy, productive brain, right?

Enter nootropics! Luckily, you don’t just have one to pick from. A wide variety of commonly-used supplements are capable of increasing BDNF, as well as nootropic drugs (such as piracetam and meclofenoxate).

Not Sure Where to Start?

If you’re new to the idea of BDNF, there’s generally not a need to play chemist and pharmacist to make your own stack. There are many pre-formulated supplements which will increase BDNF. Not all make the cut, however.

The popular Alpha Brain, for example, does not contain ingredients to boost BDNF. Others that may increase BDNF but fall somewhat short in their other ingredients that are not BDNF related.

Two supplements hit the sweet spot in terms of both effectiveness and ingredients (and won’t cost you an arm and a leg either). The first, and one most people tend to lean towards is Opti-Nutra’s Mind Lab Pro. The other, the memory supplement Better Focus.

Both can boost BDNF levels effectively and safely, and neither skimps on other quality ingredients. Among others, they feature:

Whether you’re new to nootropics or you’ve tried just about everything, getting more BDNF in your life is a significant next step in maximizing your mental potential and making sure your brain is healthy for decades to come. Start simple with trusted nootropics proven to boost BDNF, and enjoy the benefits of feeling more focused, alert, and productive.