I'm a big fan of simple and natural nootropics that work hard, and Lion's Mane Mushroom certainly falls into that category. It comes with a long list of potential benefits and, in my experience, delivers on them all.

When I use Lion's Mane, I find it not only gives a nice boost to my mood but also increases my productivity and focus. Yes, perhaps it doesn't deliver the same instant gratification many synthetic nootropics do, but for long-term cognitive enhancement and neuroprotection, it's a nootropic well worth considering, either stand-alone or as part of a stack.

What Is Lion's Mane Mushroom

In Asia, Lion's Mane Mushroom has been used for centuries to treat a wide range of health problems. It's not until recently, however, that people have started taking advantage of its nootropic properties - using Lion's Mane to improve their mood, brain health, memory, and overall cognition.

The official name for Lion's Mane is Hericium erinaceus. The Latin word Hericium translates as "hedgehog," named so because of the fungi's spiky spines and spherical shape. It's also known as yamabushitake, monkey head mushroom, and bearded tooth mushroom.

While Lion's Mane Mushroom is more than your average, store-bought mushroom (those don't do much for your brain), many people in Asia do consume it as part of their regular diet. It tastes a bit like lobster and can be a healthy alternative to meat.

If you're not a fan of seafood, however, worry not. The Lion's Mane extract that is used as a nootropic supplement is typically flavorless.

If you're prone to mood swings, Lion's Mane might be the nootropic for you. Stress and pressure affect everyone in different ways, but more often than not, they cause us to become angry and short tempered.

Many nootropics can reduce stress and help you to stay calm and focused, and Lion's Mane is up there with the best of them.

A 2018 study found that the erinacines inside Lion's Mane produced antidepressant effects in mice [1]. There are, of course, quite a few differences between humans and mice, but we do have surprisingly similar brains. This means that taking Lion's Mane or a supplement that contains it should create the same mood-boosting effects in humans. Another recent study came to the same conclusion [2].

There have been several studies on the effects of taking Lion's Mane, and many of them show that it has great potential both as a nootropic and everyday health supplement.

A big benefit of Lion's Mane mushroom is its ability to boost Nerve Growth Factor (NGF) production [5]. Lion's Mane contains two potent molecules called erinacines and hericenones, which are responsible for this effect.

NGF is a hormone that, in a nutshell, tells the body to grow nerves. It explains why Lion's Mane may help repair damaged neurons in our brains and even stimulate the growth of new neurons (which is called neurogenesis) [6].

Nerve Growth Factor is a crucial part of keeping our brains healthy. Although everyone produces some NGF naturally, using a nootropic to increase the amount of it in the body improves your brain health that much more.

For example, if you struggle to stay focused or suffer from the dreaded brain fog, odds are supplementing with NGF boosting Lion's Mane Mushroom will clear things right up, allowing you to work with more ease and efficiency.

Some medical conditions, like Alzheimer's for example, degrade the myelin sheath which slows down brain activity. Because Lion's Mane boosts NGF levels, brain signals should travel quicker, and you should notice a significant increase in your focus, speed of thought, and a decrease in reaction times [8].

One of the defining features of a nootropic is its ability to increase cognition. Lion's Mane Mushroom delivers there too.

It has been, for example, shown to improve recognition memory [9]. In traditional Chinese medicine, it's prized for its ability to do so and modern science backs this up. If your mind is gradually worsening or you're concerned about memory loss, Lion's Mane is a substance well worth considering.

Japan has one of the fastest aging populations on earth. Over 30% of Japanese citizens are older than 60, so age-related diseases are common.

To try to prevent memory loss in the elderly, a study was conducted in 2009 into the effects of Lion's Mane on mild cognitive impairment. The results showed that after being given 250 mg doses of it four times a day, the elderly volunteers showed a significant improvement in cognitive function [10].

Lion's Mane Mushroom is also much more than a nootropic. Thanks to its ability to reduce stress, studies have shown that it can lower heart disease risk in otherwise healthy individuals [11].

Stress plays a significant role in hampering our physical health. When you're always stressed, your chances of getting heart disease increase dramatically. If you have a family member who's suffering from heart disease, you're also statistically more likely to develop the illness.

In both cases, taking Lion's Mane can help decrease your risk.

It's common within the nootropics community to combine different substances in a process called stacking. The combination of multiple compounds can produce far more noticeable effects than taking just one supplement at a time.

Lion's Mane Mushroom is a potent nootropic in its own right, but it works well in synergy with others, and stacks particularly well with choline, Alpha GPC, L-Tyrosine, Bacopa, uridine, and Acetyl-L-Carnitine.

If you have some experience with nootropics, stacking should be a breeze. This is one of my favorite Lion's Mane DIY combinations.

Take twice a day.
I find this stack excellent for an immediate cognitive boost. It works well with any other racetam too. Just remember to adjust your preferred racetam's dose accordingly.

If you're a nootropics beginner, however, creating your own nootropic stack can be a little intimidating (and costly), so buying a ready-made pre-mixed supplement is likely a better way forward.

The best pre-formulated nootropic stack I have used that contains Lion's Mane is Mind Lab Pro.

Each capsule of Mind Lab Pro contains 500mg of Lion's Mane Mushroom extract. When stacked with other substances, 500mg is the perfect dose to take for maximum cognitive enhancement.

The other ingredients in Mind Lab Pro (there are a total of 10 natural nootropics that make it up) are choline and uridine (combined as Citicoline), Bacopa Monnieri, L-Tyrosine (as superior form NALT) and phosphatidylserine.

Choline (also known as citicoline) is a vital molecule as it's needed to make the all-important neurotransmitter acetylcholine [12].

Phosphatidylserine helps to maintain the permeability of brain cells [13]. It lets oxygen in and carbon dioxide and other waste products out.

Taking a supplement that contains phosphatidylserine can improve your mental energy too as it allows glucose and oxygen to diffuse into cells quicker. It also regulates the flow of neurotransmitters like dopamine, the hormone that regulates our built-in feel-good system [14].

Unless you have a very dialed in nootropic stack of your own, Mind Lab Pro is, in my opinion, the ideal way to consume Lion's Mane mushroom extract. Its other ingredients aside, it is arguably the most natural nootropic stack product on the market, free of any additives, preservatives, and allergens. Though, obviously, if you have a fungi allergy, you may want to reconsider Lion's Mane altogether.

You can find out much more about Mind Lab Pro in my full review.

So far, no conclusive research has been conducted into the optimum dose of Lion's Mane extract required to produce nootropic effects. The dosages used in clinical studies vary from 750mg per day of Yamabushitake to 3g per day of Lion's Mane Mushroom in tablet form and 5g per day in a soup.

Retail dosages typically vary from 300 mg to 3,000 mg (total) taken once to thrice a day. If you were to use Lion's Mane Mushroom alone, I'd recommend a daily dosage of between 500 mg to 1,000 mg taken one to three times a day, assuming a 30% polysaccharide content.

A with all nootropics, I also suggest you start with a lower dosage until your body gets used to it and only go as high as you need to.

If you choose to take Lion's Mane in a stack such as Mind Lab Pro, the 500 mg per capsule should be more than sufficient since it is combined and works synergistically with other potent nootropics.

Lion's Mane Mushroom is non-toxic and considered very safe, with few side effects.

You may experience minor stomach discomfort if you take it in substantial doses [17]. Some people also report itchy skin, again, when taking higher amounts. The current thinking suggests this may be because of a boost in NGF.

If you're not sure if you can take Lion's Mane mushroom products, consult your physician first. The side effects mentioned above are rare but do happen. If you start feeling unwell, simply stop taking the nootropic or, at the very least, decrease the dose.

And one word of warning.

Nootropics come from all over the world. Some are produced in labs while others, like Lion's Mane Mushroom, grow outdoors, clinging to the bark of hardwood trees. Finding them, however, can be tricky and even dangerous.

Searching for mushrooms yourself might seem like a great alternative to buying the nootropic online, but it's a risky game to play.

Many species of fungus look similar to Lion's Mane, but ingesting them can cause liver failure, paralysis, and even death. Please leave the mushroom-finding to professionals.

Where to Buy Lion's Mane Mushroom 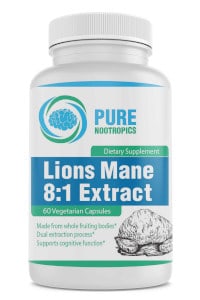 Lion's Mane Mushroom is typically sold in health food stores. You can also find it online at Amazon or, better still, a nootropics specialty store like Pure Nootropics. All vendors, especially those online, will usually carry the extract in powder form or in capsules.

As already mentioned, Lion's Make is also sold as part of a select few high-quality ready-made nootropic stacks like Mind Lab Pro. Mind Lab Pro can only be bought directly from its manufacturer's website.