Buy from AbsorbYourHealth.com
Summary:
Adrafinil is a synthetic supplement that promotes wakefulness and alertness, while also packing several impressive nootropic properties. It is very effective for long mentally demanding tasks. Adrafinil is a prodrug of and similar to modafinil, another very popular wakefulness promoting nootropic.
Type:
Stimulant
Benefits:

I'll lead off by saying that I'm a big fan of adrafinil. It is one of my favorite nootropics and has come to my rescue time and time again. It has a long list of benefits that are right up my sleep deprived alley.

If you need more proof of how confident I am in this supplement's effects, out of my entire nootropic stash, it's the one I chose to use as I write this article.

Adrafinil is a synthetic supplement that acts on the nervous system. It can be used for cognitive enhancement, to fight fatigue and to increase energy [1].

It is a compound closely related to the better known modafinil and shares similar benefits and effects. As a result, it also suffers from the same drawbacks, with one significant difference which I'll talk about a bit later.

The big difference between adrafinil and modafinil is that the former is a prodrug. A prodrug is a supplement that is inactive until the body metabolizes it. Once the body, and more specifically the liver, does metabolize adrafinil, it becomes modafinil. 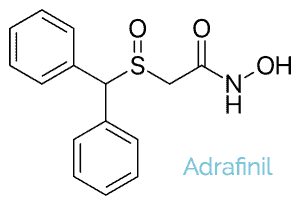 A French pharmaceutical company called Lafon discovered adrafinil in the 1970’s. In 1986, it was introduced to the European market in 1986 under the brand name Olmifon to treat all sleep disorders that cause excessive daytime sleepiness [2][3].

In 2011, Olmifon lost its marketing approval. Production stopped as a result. Pharmaceutical companies are, after all, mostly about the money.

While you can buy modafinil online without a prescription, it technically does require one. Adrafinil, on the other hand, is currently completely unregulated and not classified as a controlled substance in the US, UK or Canada. So, buying it is easy. I don't know the laws in other countries, so if you live somewhere else, you'll have to do some more digging around. Sorry.

It's time for a bit of science. Adrafinil operates on the part of the nervous system responsible for the production of adrenaline [4]. It replicates the effects of an adrenaline release by affecting the relevant neurotransmitters.

A sudden natural burst of adrenaline increases energy and improves alertness [5]. Think along the lines of the "fight or flight" response genetically encoded in us all. While not all of adrafinil's mechanics are fully understood, that is the explanation agreed upon by researchers of how it works.

Adrafinil is a prodrug, sometimes also called a precursor. Until the body, and more specifically the liver, metabolizes it, adrafinil is pharmacologically inactive [1].

Once metabolized, adrafini converts to modafinil, an FDA approved wakefulness-promoting drug. Modafinil is used for the treatment of various sleep disorders, including narcolepsy, sleep apnea, and shift work sleep disorder [6].

You may know modafinil under one of its brand names: Alertec, Modavigil or Provigil.

Pharmacologically, the benefits and side effects of adrafinil are pretty much the same as those of modafinil. There is one exception that has to do with the metabolization process. I'll touch on that a little further down.

Hypocretin is one of the neurotransmitters which adrafinil is believed to boost the production and release of [7]. This explains the supplement's stimulant properties. Higher levels of hypocretin trigger an increased creation of other neurotransmitters and hormones like histamine and norepinephrine [8]. These, in turn, have a direct and positive effect on energy levels and wakefulness [9][10].

Adrafinil can also increase the production of and prevent the breakdown of dopamine [11]. The existence of this important neurotransmitter improves the mood, decreases stress, and generally, plays a huge part in the brain's emotional responses.

If that wasn't enough, adrafinil is also thought to stimulate the release of serotonin [12]. This property can even further help with your mood and can reduce anxiety [13].

The cognitive enhancement properties of adrafinil are likely caused by both, the positive stimulation of glutamate receptors and the prevention of glutamate breakdown [14]. The result is improved brain and neuronal communication [15].

First and foremost, adrafinil is known for its wakefulness-promoting properties, and does it ever do that well. Trust me. It is after all the reason for its existence.

Several studies have shown that it is comparable in benefits with amphetamine-based drugs like Adderall [2][3][16]. Where it holds an advantage, however, is that it does so without the typically associated side effects, like jitteriness and hyperactivity.

On top of it, adrafinil also provides several nootropic benefits.

As a general stimulant, adrafinil gives you physical and mental energy [17]. It can help with focus [1], mental clarity [14], short-term memory [18] and reaction time [19]. These properties make it popular with anyone who suffers from sleep problems like sleep apnea or insomnia. It is also a favorite with those who experience sleep deprivation and significant daytime fatigue.

Among others, adrafinil is an excellent compound for anyone who works at night, does shift work, is a student, or has an 18-month-old at home (they do eventually start sleeping, right?)

Adrafinil also stimulates the release of adrenaline and dopamine [11]. As a result, many users, myself including, feel a heightened sense of well-being and an improved mood, as well as reduced stress [13].

Here too adrafinil has an advantage over Adderall and similar amphetamine-based drugs, as it achieves these effects in a non-habit forming way [14].

As I already briefly mentioned, adrafinil is not only a stimulant but also gives several nootropic like benefits. Front and center are cognitive effects like improved learning capacity and memory [14].

The speed with which your brain recalls things also massively improves. This increase has been shown to be especially true with verbal or written communication, allowing you to form what you want to say faster [20].

Hence my choice of taking adrafinil to write this article.

Ultimately, adrafinil makes mental work a lot less tiring and demanding. Anytime I use it, I find it lot easier to perform mentally challenging work that stretches over an extended period. Focusing without getting distracted also stops being a struggle.

While adrafinil is very effective on its own, it doesn't hurt to give it a helping hand if the need arises.

Much like modafinil, adrafinil stacks quite well with other nootropics, specifically with the cognitive enhancer Noopept, and with racetams phenylpiracetam and piracetam.

My personal favorite adrafinil stack is with Noopept. In my experience, it's a great combination for long periods of mental work that require both attention and deep focus. Here is the magic formula.

Take as needed (at most twice a day).
I usually take this once in the morning. If I feel the need, I will either repeat the same stack later in the day or take just 10mg of Noopept one or two more times.

The recommended dosage of adrafinil is 150 to 300 mg per day. Make no mistake, this is a strong nootropic, and it kicked my butt the first time I tried it.

As you're starting out, I suggest sticking to the lower end of the range. You will definitely still feel the stimulation, but it will give your body a chance to adjust. Then, over time, increase the dosage as needed up to (but not exceeding) the recommended maximum.

Adrafinil promotes wakefulness. Therefore, ideally take it early in the day. The later you use it, the greater the odds it will negatively impact your sleep.

Take the nootropic on an empty stomach too. You should feel the effects within an hour, and they will typically last for 4 to 5 hours.

Avoid taking adrafinil for prolonged periods of time. Before kicking in, the drug needs to be converted by the liver, and in the long run, this may negatively impact liver function [1].

If you insist on taking adrafinil over a longer period, do two things.

The vast majority of adrafinil users will experience no side effects. It is a safe supplement used by millions worldwide. As long as you stick to the recommended dosage and guidelines, you should have very little to worry about.

Never having had issues, I can attest to that.

If you do, however, experience any of the side effects I review below, stop taking the supplement and seek the advice of your doctor. Safety first.

The most commonly documented adrafinil side effects are mild. They can include the typical dizziness, headaches, stomach discomfort and nausea [1][21] you can get from pretty much any supplement.

A few studies I have read suggest an increased risk of high blood pressure and heart rate [22]. While these effects tend to be consistent, they are also quite minor. The best way to minimize them is to not take too high of a dose.

That said, if you have heart issues, avoid adrafinil altogether, or at the very least, check in with your doctor before taking it.

Some experience insomnia if they take adrafinil too late in the day. This is not so much a side effect as it is user error. One of this supplement's properties is, after all, to promote wakefulness. It only makes sense that the later you take it, the greater the odds of it affecting your sleep.

On the more serious side of things, using adrafinil over an extended period may negatively impact your liver [1]. Adrafinil is a prodrug metabolized by your body. This process increases liver enzymes [23].

If you have liver problems to begin with, avoid this supplement altogether.

Otherwise, to alleviate any potential liver side effects, cycle the drug in the way I mention in the Dosage section, and consider having your liver function regularly monitored.

In case this applies to you, also note that the World Anti-doping Association bans the use of adrafinil [25]. So no taking adrafinil and then going to the Olympics.

Where To Buy Adrafinil 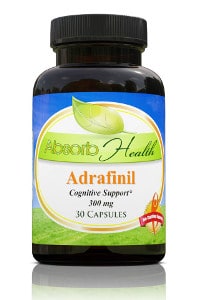 Adrafinil is completely legal for purchase in the US, UK, and Canada. A prescription is required to obtain it in Australia, but you can import it if you have it shipped internationally or travel abroad.

Being legal as it is, I never see it on store shelves. I order my adrafinil online from Absorb Health. They're a trusted source for all things nootropics that I can confidently recommend. To ensure purity and quality, all their products are verified by 3rd party labs. While this is always important, it's especially so with adrafinil which is a synthetic drug. You do not want to buy it from anywhere shady.