You are here: Home / Guides / Comparisons / Modafinil vs. Adrafinil

There is a reason why the adrafinil vs modafinil comparison comes up as often as it does. Both are stimulant nootropics that are very closely related to each other.

The two compounds produce almost identical effects. Among many others, these effects include an increase in brain power and wakefulness. But, there are also a few significant differences between the two supplements.

It’s those differences that will make one or the other a better choice for you.

Both adrafinil and modafinil are classified as eugeroic stimulants. These are compounds which significantly improves alertness [1] and wakefulness [2]. Where eugeroics differ from most other stimulants is in how they achieve their effects.

Instead of targeting the entire nervous system, as is the case with amphetamines, caffeine and other classic stimulants [3], eugeroics affect very specific neurotransmitters in your brain [1]. Think of them as more of a sniper drug. They go in and get the job done with pinpoint precision.

By targeting only specific parts of the brain, eugeroics do not increase the overall psychomotor activity in your body [1]. That is, again, not the case with other stimulants.

Eugeroics are more gradual and “smoother” acting drugs. They come on and wear off a lot more gently than others. 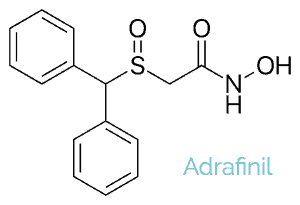 Gone are the euphoric effects and feelings of anxiety typically associated with amphetamines [4]. So are the tough to bear “crashes” once they wear off.

But, just because they have a smaller footprint on the body, so to speak, eugeroics are not any less effective than other stimulants. They work just as well and are often the primary weapon in fighting various sleep disorders.

And because of their “smoothness,” eugeroics can treat conditions without increasing hyperactivity or messing up regular sleep patterns.

This difference makes adrafinil and modafinil much more approachable than other stimulants. This is also why they have become such popular smart drugs.

These two nootropics have pretty much become go-to’s for anyone needing to perform at peak cognitive levels while staying energized and awake for long periods of time. Students, shift workers, and even exhausted parents needing to perform at their day jobs – all flock to either or both supplements.

For all their benefits, modafinil and adrafinil do have some side-effects. The most common ones include headaches, stomach discomfort, and a dry mouth.

These adverse effects are, however, rare. And, when they do show up, they usually do so very temporarily. 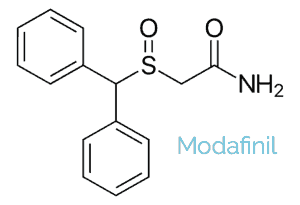 Bouts of insomnia may also occur with either stimulant taken too late in the day. But, that’s an easy fix as well. Just don’t take them too close to bedtime. Keeping you awake is, after all, what these two were created to do.

A few more serious side-effects are also possible. They may include abnormal heart rhythms and blood pressure inconsistencies. Luckily, these tend to not come up with moderate doses and short-term use, which is how most of us use adrafinil and modafinil.

In other words, if you’re planning on taking either compound as a nootropic, you shouldn’t have much to worry about. Even during the odd times when I probably push the dosage boundaries a bit too much, I never have issues.

How Adrafinil and Modafinil Are Similar

Adrafinil is what’s called a prodrug (or precursor) to modafinil. This fancy name means that it is pharmacologically inactive until metabolized by the liver [5]. Once metabolized, adrafinil simply becomes modafinil.

As you can imagine, this means that both work nearly the same way and have the same effects and benefits.

Both modafinil and adrafinil (once metabolized) increase wakefulness by acting on your amygdala and hypothalamus regions of the brain [1]. This action bumps the output of orexin (also called hypocretin). That’s a molecule neurons use to communicate and is directly responsible for regulating wakefulness [6].

Levels of the neurotransmitter norepinephrine also go up because of the same action [1]. Norepinephrine, often known as noradrenaline, is an organic chemical which boosts your alertness and focuses attention [7].

Glutamate is a neurotransmitter which your cells use to talk to each other [9]. The improved communication translates to better overall cognitive functionality. More specifically, expect better focus, memory, and speed of recall of stored information.

There is a third way in which modafinil and adrafinil achieve their effects. They stimulate dopamine production [10], making more available for your brain to use.

Dopamine, another neurotransmitter, is typically associated with creating pleasure responses and improving the mood. The more of it is kicking around, the better you feel.

But dopamine also has a lesser know effect of increasing alertness [11]. In this case, that effect works synergistically with the higher levels of noradrenaline I talked about a bit earlier.

The way in which eugeroics like modafinil and adrafinil make more dopamine available differs from other mainstream stimulants. Amphetamines and the like produce more dopamine by stimulating its release [12]. That can be a dangerous game to play.

Eugeroics, on the other hand, prevent your system from removing dopamine. This more indirect method is a lot less intrusive and more gradual in nature. It is also what makes adrafinil and modafinil a lot less potentially addictive than traditional stimulants [1].

When it comes to promoting wakefulness, alertness and slowing down the onset of fatigue, both modafinil and adrafinil work exceptionally well [1]. The two can even be more effective than methamphetamine [13], a potent stimulant drug, at fighting the urge to sleep.

Compared to other stimulants, our two eugeroics also don’t result in the typical “crashes” or extreme sleepiness after you stop taking them.

There are also several powerful and measurable nootropic effects that modafinil and adrafinil create [14][15][16]. The list of cognitive ability improvements is long and quite impressive: better memory and speed of recall, easier learning, sharper focus, improved spatial awareness and much better performance on all tasks which require higher-level thinking.

And, of course, whether you’re well rested (I envy you) or sleep deprived, both modafinil and adrafinil work wonders for improving the mood [17].

The Differences Between Modafinil and Adrafinil

Even though adrafinil turns into modafinil inside our bodies, making them very closely related to each other, the are several significant differences between the two. Anyone considering taking either substance should be aware of these.

Depending on your situation and needs, these differences will likely be the deciding factor on which substance you may want to take.

Before adrafinil becomes modafinil, it’s processed by your liver [5]. It only makes sense then that it is the slower acting of the two substances.

You’re typically looking at about two hours after taking modafinil for it to reach peak levels in the bloodstream [18]. Adrafinil can take an extra hour to get there.

The half-life of the two is also significantly different, with modafinil lasting between 14 and 16 hours and adrafinil only 5.

While it may not seem like it at first glance, there are advantages to a shorter half-life. For one, not having adrafinil affect your sleep patterns (by taking it too late in the day) is a lot easier to do than with modafinil.

When adrafinil metabolizes into modafinil, not all of it is fully converted. A good amount turns into an inactive compound called modafinilic acid [19]. This makes modafinil much more potent than adrafinil and means it requires smaller dosages to achieve the same effects.

In practice, the potency difference is about threefold. Where a typical dose of modafinil ranges between 100 mg and 200 mg, you need 300 mg to 600 mg of adrafinil to achieve the same effect.

Toxicity is where adrafinil is at a disadvantage compared to modafinil. Because it is first metabolized by the liver, prolonged use of adrafinil can, in some cases, result in an elevated level of liver enzymes [5]. This enzyme increase is typically an indication of either inflammation or damage to liver cells.

However, this side-effect is rare. When reported, it’s by individuals who followed a high-dosage and long-term adrafinil regimen. So, while they should be aware, more casual or opportunistic users rarely need to worry.

The legal status is probably the most important difference between adrafinil and modafinil.

In the US, modafinil is a controlled substance and on the list of Schedule IV drugs. It has equivalent classifications in Canada, Australia, the UK and most European countries. You cannot, therefore, legally buy it without a doctor’s prescription.

On the flip side, adrafinil is nowhere nearly as tightly regulated. It’s available in most countries freely and without a prescription. You will have no trouble finding it online and if you’re lucky, maybe even at your neighborhood health food store (though in my experience, you may have better luck spotting a unicorn).

One other important thing to note is that adrafinil and modafinil are on the list of drugs banned by the World Anti-doping Association, labeled as performance enhancers. If that is something you need to worry about, stay clear of both and instead explore one of the many other alternatives to modafinil.

Pharmacy bought modafinil can be extremely expensive. In the US, for example, the cost can be a staggering $8 to $17 for one 200mg pill. That is way too rich for my blood, and I’m sure of many others.

That said, if you choose to buy it online, you can get it anywhere from $3 to $1 per 200mg pill, depending on how big of an order you place. There are several good online modafinil vendors the nootropic community generally recommends. Those are also the sources I use.

Compared to modafinil, adrafinil is a bit cheaper. My goto nootropic source, Absorb Health, sells it for between $1 and $0.80 per 300mg pill, again, depending on how big of a bottle you get.

So which one should you go with? Well, as with most thing in life, that depends.

If you have a doctor’s prescription for modafinil, that is without a doubt what you should be taking. Whether you get it on online or at a pharmacy, however, is entirely up to you.

I have and will continue to use both stimulants. Which one I choose depends on the situation.

In most other cases, I lean towards adrafinil. This is why I chose to place it, and not modafinil, on my list of top brain enhancing drugs. It’s not regulated and can be easily bought without a prescription.

Modafinil, on the other hand, is classified as a controlled substance in most countries around the world.

Adrafinil is marginally cheaper, which may make it much more accessible. Modafinil can get crazy expensive if bought at a pharmacy. Granted, though, there are much, much more affordable modafinil sources.

I also like adrafinil’s shorter half-life. It allows me to take the supplement much later in the day without having to worry about messing up my sleep. I sometimes won’t know first thing in the morning what my whole day will look like. Adrafinil allows me to be a little more flexible and reactive.

That said, on the days I do know I will need to be on from morning until night, the adrafinil vs modafinil decision is easy. It’s modafinil all the way.

Ultimately, both compound are safe, well tolerated and very effective options. They are nearly identical in the end results they provide. If you need a nootropic that will keep you awake and let you perform at peak mental capacity for hours on end, both modafinil or adrafinil fit the bill perfectly.